10 years of iPhone excitement in 9 charts 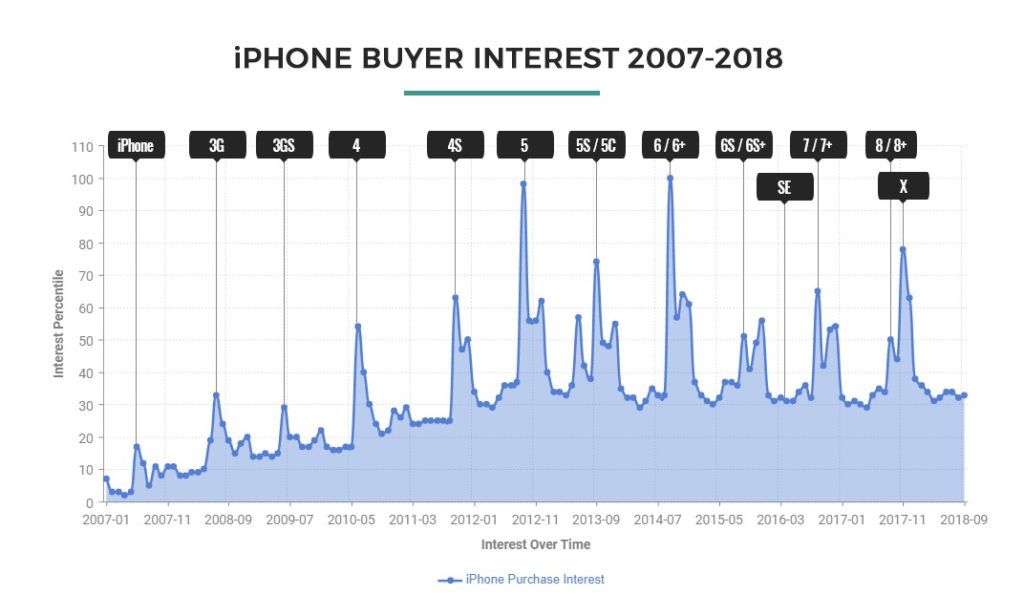 This is how interested people have been in each generation iPhone

The new iPhones are coming and interest is insanely great, fresh research explains – it looks like Apple customers are very interested in the new device as it prepares to introduce its fall collection of iPhones, iPads, Macs and wearables.

BankMyCell has aggregated both global and regional consumer iPhone “purchase and resale intent” queries made using Google between 2007-2018 to create a big collection of visualizations that show the impact of Apple’s iPhone product launches. The data reveals some interesting insights into consumer mood and expectation around these new devices, while analysts predict the company will sell over 222 million of the new models in the next year:

The charts make interesting reading. They pretty much confirm that the reason so many people still use an iPhone 6 is because so many people ran out and got hold of them – and that many of those long-lived and still popular devices are still in use once their original owners upgraded their device. It seems that the iPhone 6 and 6S together account for just over 14 percent of all enterprise mobility activity, and with enterprise bosses now coalescing their mobile deployments around iOS, it makes sense for them to upgrade.

[Also read: How to watch the iPhone and Apple Watch announcements]

That’s interesting because those iPhones are now four years old – will this be the year we see customers upgrade to one of Apple’s new (and presumably cheaper) iPhone Xs models?

Here are all the images in one gallery — click through to see them all:

Given the threat of more expensive Apple smartphones in the event the current U.S. chief makes them more expensive for U.S. consumers by intensifying a self-declared trade war with China, might this prompt people to upgrade now, rather than wait another unpredictable year? Apple offers its iPhone Upgrade Program to help make it easier to accomplish that.

We do have a sense of what to expect from these new devices.

Join us 12 September at 6:00 pm to watch the #AppleEvent live on Twitter. Tap ❤️ below and we’ll send you updates on event day. pic.twitter.com/ufxuu3kt9H