WWDC 2016: Siri is getting much, much smarter 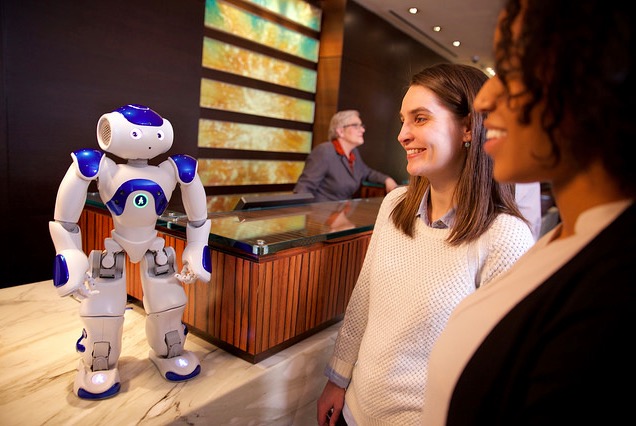 This is the IBM Watson-powered concierge robot in use at a Hilton Hotel.

It’s  beginning to feel like Apple has big plans for Siri at WWDC with some key improvements already beginning to slip, not least the introduction of Siri for the Mac, but third party app support and much enhanced intelligence also seem highly probable.

The Information claims Apple will open up the Siri SDK to third party developers. That’s a welcome move that’s going to extend the reach and breadth of what Siri is able to achieve, and will also let most of us do more using Siri and other apps. This is going to massively improve what we can do with the assistant.

Apple has a lot of experience in speaker design, far more than Amazon – it has all those Beats people, for a start, and those iPad Pro speakers drop us a hint of the kind of power we might expect in a future iPod HiFi derivative. Of course, in conjunction with an Apple TV you’ll probably also get to use this to control devices in your smart home, but since almost nobody actually has a smart home yet (and given the security nightmare of the sector at this point in its evolution) that’s hardly a big deal. Right now, I think this product’s gonna be “all about the music” (again).

Those reports only cover part of what’s coming for Siri at WWDC, of course – it is also reasonable to suggest the company will improve its Proactive intelligence features that drive some Siri functions.

It is prudent to anticipate the company will add more capacity to the assistant, enabling us to ask more complex questions. Apple’s acquisition of VocalIQ last year suggests Siri will (finally) become more capable of understanding what we say, because that tech learns as you use it. Don’t be too surprise to see Apple introduce some of the other amazing technology it has picked up, from Emollient, Perception and a number of unannounced and future Apple acquisitions.

What I’m most excited to find a few more details about is how the company intends extending Siri’s built-in AI. Might we see a little Watson-style deep learning intelligence made available “for the rest of us” at WWDC? After all, Watson already powers a concierge robot used by the Hilton Hotel. Alternatively (or additionally) will Apple’s Siri team speak with Viv to bring her into the frame? It’s surely possible, given the existing relationships between all these people. All it takes is cash – and Apple is not short of that.

So what’s Siri got to say about WWDC? I asked her, but “I’m so excited, but you’ll have to wait and see,” was all she had to say. Apple just says its going to say “Hello” – to the next big thing, I guess. Smarter Siri and more connected platforms, I suppose. Interesting times? We’ll see.