The Supercalifragilistic Scale of Apple’s iPhone 8 Opportunity is Expialidocious 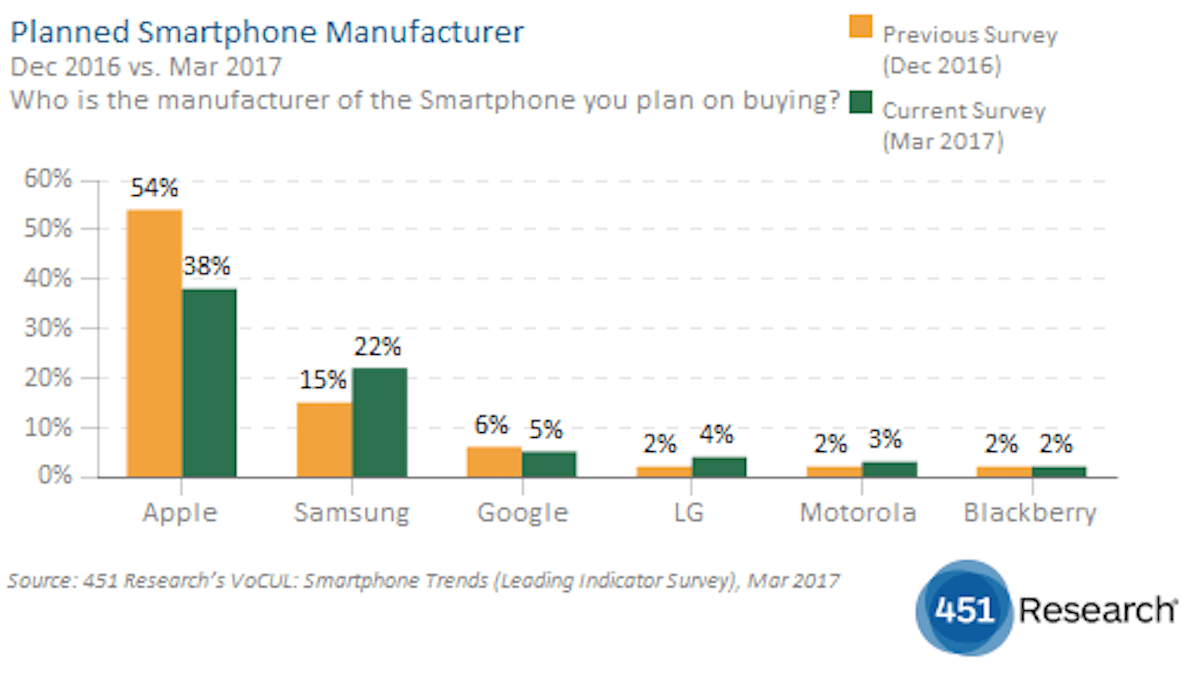 Huge. That’s what it is, and a flotilla of statistics in the last 24-hours show us just how big an opportunity Apple has as the entire smartphone market slumps in preparation for its next iPhone models this year.

No Pain, No Gain

Apple’s Tim Cook said, “We’re seeing what we believe to be a pause in purchases on iPhone, which we believe are due to the earlier and much more frequent reports about future iPhones.”

He’s right, earlier-than-usual speculation about Apple’s tenth-anniversary iPhone may have dented sales a little (but at over 50 million units in a quarter, that’s still not too bad), but this market softness translates into BIG market opportunity. Here’s why I think this:

451 Research claims smartphone purchasing is down for the second consecutive quarter, and that demand is at a nine-year low. They are seeing softness in demand for iPhones which creates the illusion of exacerbated demand for Android devices, but the number of people planning to purchase a new smartphone in the next 90-days is down 2.7 percent overall.

Apple remains the preferred manufacturer among planned smartphone buyers, with 38% saying they will purchase an iPhone over the next 90 days.

This good news needs to be tempered by the fact that this intent is 16 points lower than in the previous quarter and a combined 27-point drop over the past six months, “a steeper decline than is typically seen two quarters after a new model release”.

The Slow Down Is Here

“Despite smartphone demand sinking to its lowest level of the past nine years, our latest survey reveals positive news for Samsung and the Android operating system. While demand for Apple iPhones is down, consumers are increasingly anticipating new iPhone models later this year, which will likely drive a new wave of buying,” said Andy Golub, managing director of 451 Research’s Voice of the Connected User Landscape end-user surveys and research.

That interest in the next-generation iPhone is much greater than normal has also been confirmed by Consumer Intelligence Research Partners, who say:

“The Apple iPhone US installed base now consists almost entirely of iPhones introduced in the past 30 months,” said Josh Lowitz, CIRP Partner and Co-Founder.

This means that when it comes to the iOS ecosystem, developers don’t need to be at all concerned by fragmentation.

This is spreading across Apple’s markets. In China, the premium smartphone sector (which includes the iPhone and the few premium competitors that exist) shrank 33 percent sequentially. Apple holds 80 percent of what’s left, but there can be little doubt that savvy Chinese tech consumers are just as aware as everyone else on the planet that Apple may have big plans for the next-generation iPhone.

Android loyalists meanwhile shore up sales across that platform — but even though the share is up, overall demand is lower than normal.

Think about these data points and it’s possible that if Apple’s next smartphones capture popular imagination, they will unleash a big wave of pent-up demand as the world’s most savvy smartphone customers (who have been waiting for it all year) get into the device.

There is a big risk, of course: Not only will Apple management have to handle a couple of relatively grim quarters as they grapple with iPhone demand slow down and a broader global picture of deep economic and social insecurity, but the device they do eventually release is going to have to live up to levels of hype I personally have not seen since 2006, just before Apple announced its first iPhone. Though I suppose one unexpected bonus to this may be slight depression in stock value which Apple can exploit for its giant stock buyback scheme.