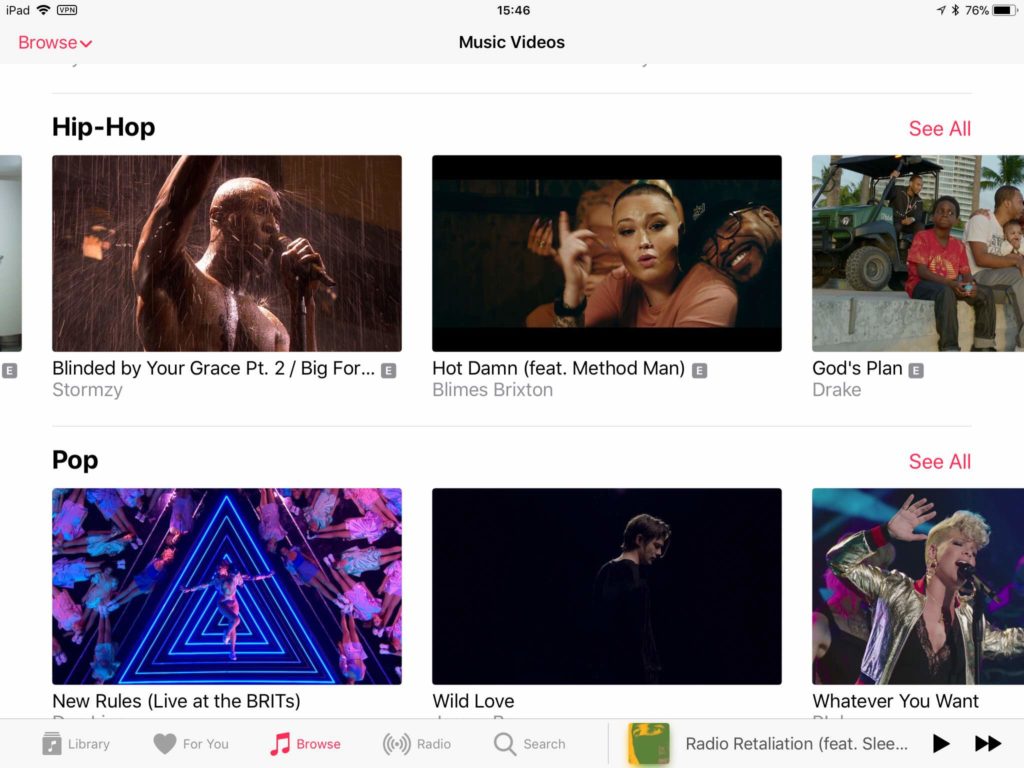 You can even watch the wonderful Stormzy slam the UK’s appalling Tory government for its failed response with Grenfell Tower.

Apple’s iOS 11.3 upgrade is most definitely on the way (I think it was delayed by the Siri message speaking bug found late last week), but Apple’s still got a few other great tricks up its sleeve, and it threw out a superb one today – introducing curated and self-made music videos inside Apple Music.

As I wrote last year, no one has really got music video right since MTV. Apple wants to set this right, and today it updated the Apple Music app with a new Music Videos section, which it is calling “one of the most extensive music video catalogues available.”

To get things started Apple is offering exclusive videos from A Tribe Called Quest, Beck, Kylie Minogue, and Yebba. You’ll also find a whole selection of curated video playlists, including Today’s Video Hits, The A-List: Pop Videos, and Classic Dance Moves. Apple Music subscribers will in future also be able to build their own video playlists.

The section (available through the Browse tab of Apple Music) lets you stream a huge collection of music videos using your Mac, iPhone, iPad, Apple TV or even an Android device using the Apple Music app. (You get some neat features, too, including a minimized video playback window when you need to do something else on your device).

The great thing about this service, in contrast to YouTube, is that you know that in order to be offered by Apple Music the acts whose music you are enjoying is getting properly paid.

What is interesting (apart from the potential that Vevo and Apple may reach some kind of future deal) is that Apple’s move to offer music video via Apple Music comes shortly after the music industry made its biggest noise yet around its concerns for unlicensed music video distribution.

“We continue to operate in a distorted marketplace, replete with indefensible gaps in core rights, inhibiting investment in music and depriving recording artists and songwriters of the royalties they deserve,” said RIAA chairman and CEO Cary Sherman.

Apple will now use its service to go head to head against YouTube and Spotify, promising it will “regularly debut new, exclusive music videos from superstars and rising stars alike.”

Meanwhile, of course, Apple Music users can also legally download these videos for offline use.

However, unlike YouTube, Apple Music already offers a curated music service in the form of its Beats radio channel – it really isn’t hard to imagine the company extending this to its own version of music video and exclusive music and culture-related TV.

In other words, an accessible anywhere, music video service with human curation and all-you-can-eat access to all the music and video you want to enjoy available to anyone with an Apple Music subscription. The acts get paid, and unlike other services, the human touch is woven deep within what you get.

This all makes sense, and while Jimmy Iovine may be hitting the consultant’s chair, he’s quite clearly been very busy behind the scenes ramping up the Apple Music service. After all, only this time last year he said: “A music service needs to be more than a bunch of songs and a few playlists… I’m trying to help Apple Music be an overall movement in popular culture, everything from unsigned bands to video. We have a lot of plans.”

How to use Apple Music videos

The Apple Music videos selection is not at all hard to find.

On an iOS device, open the Apple Music app

The next page is split into the following sections:

You can click See All in most sections to get deeper into the catalog.

You can also use the Apple Music Search icon to find videos by specific artists.