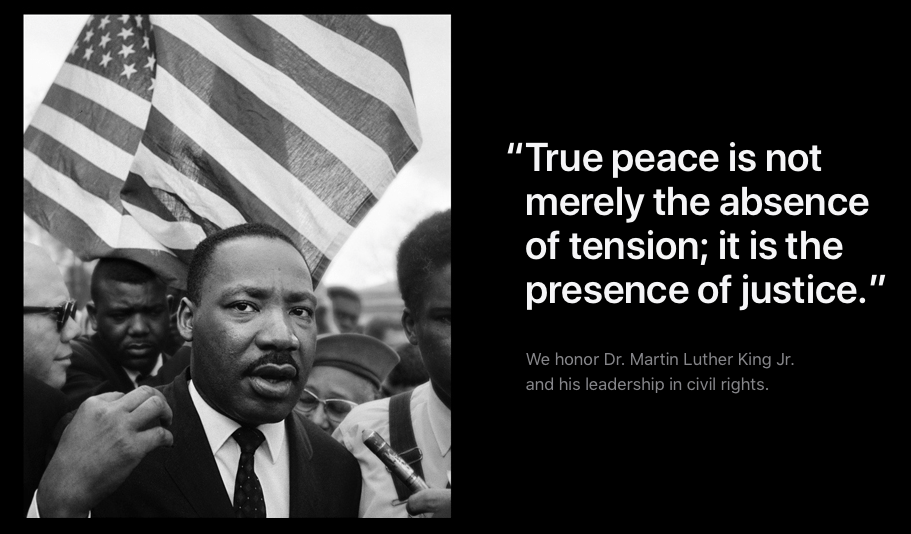 Martin Luther King, an American who made America greater

Just a few days since announcing an attempt to help dismantle barriers faced by communities of color with its $100 million Racial Equity and Justice Initiative, Apple has shown its deep respect for Martin Luther King by turning over its home page to the American hero on his annual commemoration day.

True peace… is the presence of justice

In a simple message on the Apple home page, the company quotes King, who once wrote:

“True peace is not merely the absence of tension; it is the presence of justice,” in his book, Stride Toward Freedom, which was a memoir of the Montgomery bus boycott.

On the assassination of the true U.S. hero, Gordon Parks said:

“Dr. King protested the way American whites preferred that he protest – non-violently. He spent the last dozen years of his life preaching love to men of all colors. And for all this, a man, white like you, blasted a bullet through his neck.”

The company shows its support for King each year. Last year, it carried a King quote from his acclaimed ‘Letter from a Birmingham jail’: “Whatever affects one directly, affects all indirectly.”

Apple CEO, Tim Cook, has huge respect for King. In a Tweet to mark the day, he shares another quote from the great man:

“It will be power infused with love and justice that will change dark yesterdays into bright tomorrows, and lift us from the fatigue of despair to the buoyancy of hope.” — Dr. Martin Luther King Jr. pic.twitter.com/tL0OuO0WTT

Following the tragic events in Minneapolis in 2020, Cook wrote an open letter ‘speaking up on racism’ in which he wrote:

“While our laws have changed, the reality is that their protections are still not universally applied. We’ve seen progress since the America I grew up in, but it is similarly true that communities of color continue to endure discrimination and trauma.”

In a related move, Apple has also published the story of Apple Distinguished Educator, Paul Lang, who is encouraging his children to think about Martin Luther King and his legacy with an innovative learning project.

“Martin Luther King Jr.’s legacy of striving to be excellent, striving to do what’s right, and striving to be fair goes beyond race. It’s economics and empathy, and this idea of solidarity with all human beings,” Lang states.