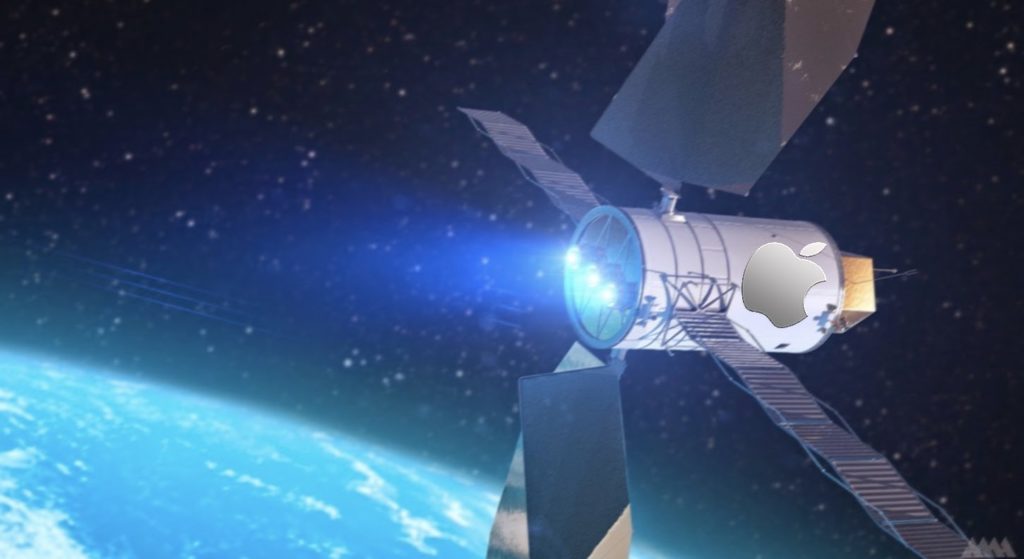 Apple’s making waves with its hire of two “top” Google executives who were involved in the giant ads company’s attempt to find opportunity in outer space.

The two men, John Fenwick, who led Google’s spacecraft operations, and Michael Trela, head of satellite engineering, left for Apple a few weeks ago, according to a Bloomberg report.

The report tells us:

Boeing has spoken with Apple a propos plans to jointly invest in a plan to provide broadband access using around 1,000 satellites in low Earth orbit.

It also reveals a tangled web of involvements of all Duffy and his new recruits in various plans.

It also tells us that innovation in the satellite industry is at present mostly around image collection and communications.

Here are three reasons Apple may be looking at this. (I imagine Apple’s executives would laugh at all three of them, which is why I feel I’m close to at least a sense of a truth):

It is inevitable that Apple wants to invest in improving Maps. The idea of being in control of the primary technology is fundamental to its business plan. It’s no great stretch to speculate the company may just want more control of the satellite imagery used in Maps.

The move to IPv6 may have passed may internet users by, but it was of crucial importance as we develop a fully connected planet.

Right now, we have millions of iPhone and iPads and Macs and other devices that all need to be online.

To enable this there must be a constant investment in capacity, or an optimization of existing capacity.

As demand for network access grows while connectivity becomes of increasing importance to its business, Apple finds itself becoming in thrall to broadband providers and mobile network companies.

Those companies are aggressively moving to take control of their networks, they want to compete with the tech firms to make sure they don’t become dumb pipes. They have some advantages, too – not only do they own the networks, but they also have proven capacity to handle micropayments.

I’ve written before (somewhere, I think) about how one day you’ll pay an extra dollar to watch a movie without lag while on a fast train across multiple countries. Why wouldn’t Apple want to have a back-up plan to help it negotiate from strength with these people as connectivity increasingly transforms itself into yet another kind of currency?

The Internet of things means even the surface of your road may need to get online, if only to share data with transit authorities. It also means your coffee pot may want to chat with your iPhone using the ‘Net. In many cases connection can be shared, but your car won’t share its connection.

Now think on this: The internet connection that connects your car will be essential. Not only will it connect your car to the ‘Net, and the server-based intelligence that is situated there, but it will also enable your vehicle to speak with other cars.

Vehicle to vehicle communication will be critical — not just in terms of helping smart connected vehicles to avoid collisions, but in terms of enabling them to responsively respond to real-time alterations in traffic flow as AI takes over mass transit systems.

(I agree that mesh networking is likely to be part of that picture, but I need to see the vehicle industry agree some standards before I can predict that).

I’ve written before (again, somewhere, and I don’t know where or when) that it will be unacceptable if connected cars from different manufacturers collide simply because they hadn’t put together shared standards to enable intra-car communication.

So – we need a connection for cars, or any other connected device (that Apple Watch is only one of the ways in which the iPhone will be replaced by a forest of devices that serve different forms of primary need): That connection needs to work wherever you and your car (or other device) happens to be on the planet. Without fail. It is within this context this matters.

And one more reason

Updated September 2018: It is also worth pondering Apple’s growing empire of streaming media products. Is the notion of an Apple Satellite TV streaming service so outlandish?

All this complexity. Perhaps the simple answer is best. After all, if you want to create a global AR/AI network and media company, you’re going to want to invest in the means of production. In this case, that would be the broadcast network. Whatever way you look at it, Apple is headed for the stars.