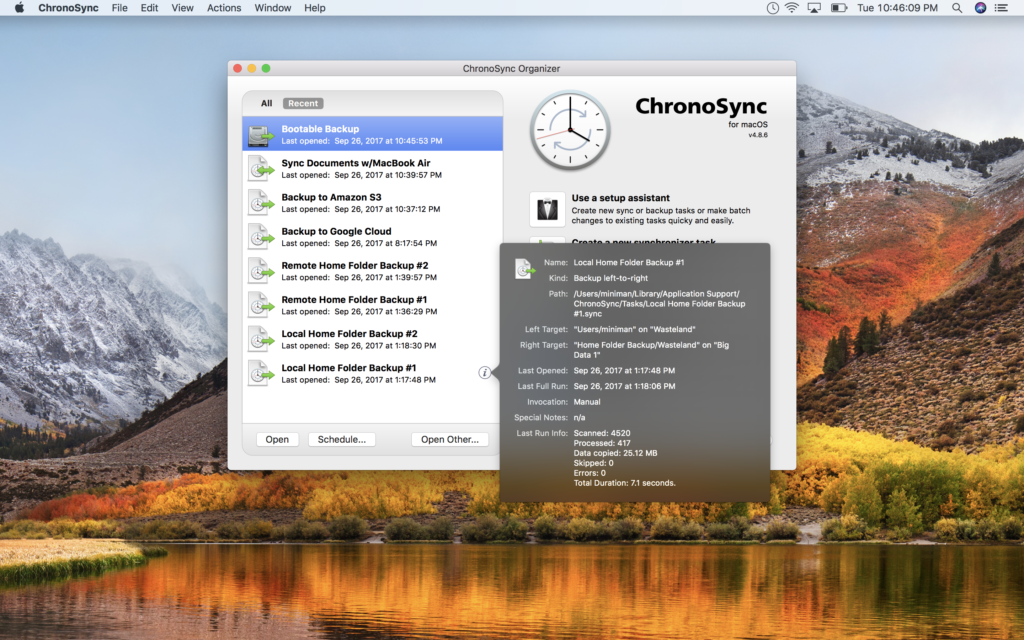 An old version of ChronoSync

Econ Technologies ChronoSync, one of the world’s leading Mac backup utilities just got a major and significant update for macoS Mojave – including support for Apple’s new APFS file system and the ever-popular Dark Mode.

ChronoSync is a robust automatic backup and sync utility for the Mac. It’s a really flexible solution equipped with a huge range of features:

Not only will it backup your Mac to external devices, sync files and folders between Macs and automatically create fully bootable backups, but it has the capacity to get deeply granular, so you can easily setup varying backup routines for files and folders all across your system.

You aren’t confined to local backup – the system also supports backup to Amazon S3 or Google Cloud – and also keeps an archive of previous versions of your files.

It costs $49.99 for the basic app, or $59.98 if sold with the ChronoAgent bundle, but is made available as a free update to all existing users.

The latter is a high-performance remote file sharing solution to transfer files securely to a remote Mac, and also lets you access files on that Mac from your iOS devices. And yes, you can even control remote backup of your Mac from your iPhone.

There’s a lot that’s new in the latest version of this solution, ChronoSync v4.9. The company calls this “our biggest release in years”.

Apple has switched to a new file system called APFS (Apple File System) in the latest edition of the Mac OS.. This is the system it was already using on iPhones and iPads. Econ Technologies state:

“This is the most substantial change Apple has introduced since the introduction of Mac OS X, which is over 18 years ago.”

Though previous versions of the ChronoSync support APFS, new ChronoSync v4.9 is optimized to work with Apple’s new file system.

The company claims this means that scanning the file system for changes and subsequently copying files is noticeably faster than previous versions. The app also works better with older Macs running previous file system, HFS+. It can detect which file system it is dealing with and use the most appropriate technologies for the task.

This is one of the very best backup utilities you’ll find for your Mac, and offers a far more sophisticated set of features than some. It’s a good choice for complex environments, thought it also has a slightly steeper learning curve than some apps. If you’re looking for a backup software solution you should certainly take a look.