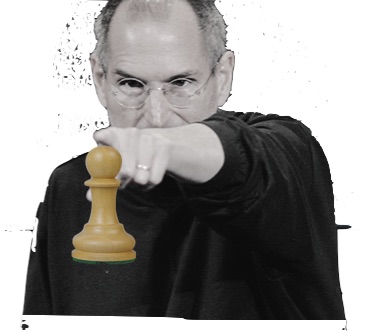 Apple’s Steve Jobs was a chess player. He didn’t just play any kind of chess, but a far more complex version of the game called Kriegspiel.

“Apple founder Steve Jobs was a Kriegsspiel fan; in the early days of the company he’d play games with engineer Daniel Kottke,” explains David M. Ewalt in his book, Of Dice and Men. Jobs’ liking for the game is also confirmed in Walter Isaacson’s Steve Jobs biography. It looks like he really enjoyed it.

What is Kriegspiel? The game is a little like a combination of Chess and Battleships. The pieces move in the same way as Chess, but players cannot see each other and cannot see the disposition of each other’s pieces. They sit back-to-back with their own board upon which sit only their playing pieces.

How do they play? A moderator tells them if a move they want to make is legal, or illegal (because an opponent’s piece is either in the way or threatens them if they make that move). Their job is to create a strategy while figuring out where their opponent’s pieces are. It looks like an incredibly challenging game.

To my mind, one of the most interesting aspects of the game is that it teaches players to prepare for things they cannot see.

That’s a valuable lesson because it promotes individual creative and critical thought. After all, Chess is hard enough, but Kriegspiel makes it a game of limited information, too.

I think the game provided a pretty good grounding for the man Jobs became, and his search for world changing ideas.

You can find out more about Kriegspiel here, but one thing you can’t find is an app for Macs or iPhones that enables you to play it. I think that’s a shame as the game lends itself to online two-player struggles.

Whoever developed a Kriegspiel app could even stick a fee on it and donate their income to cancer research. I think that could be a nice gesture of remembrance of the game’s famous player.