“Moof”: FileMaker becomes Claris, promises enterprise apps ‘for the rest of us’ 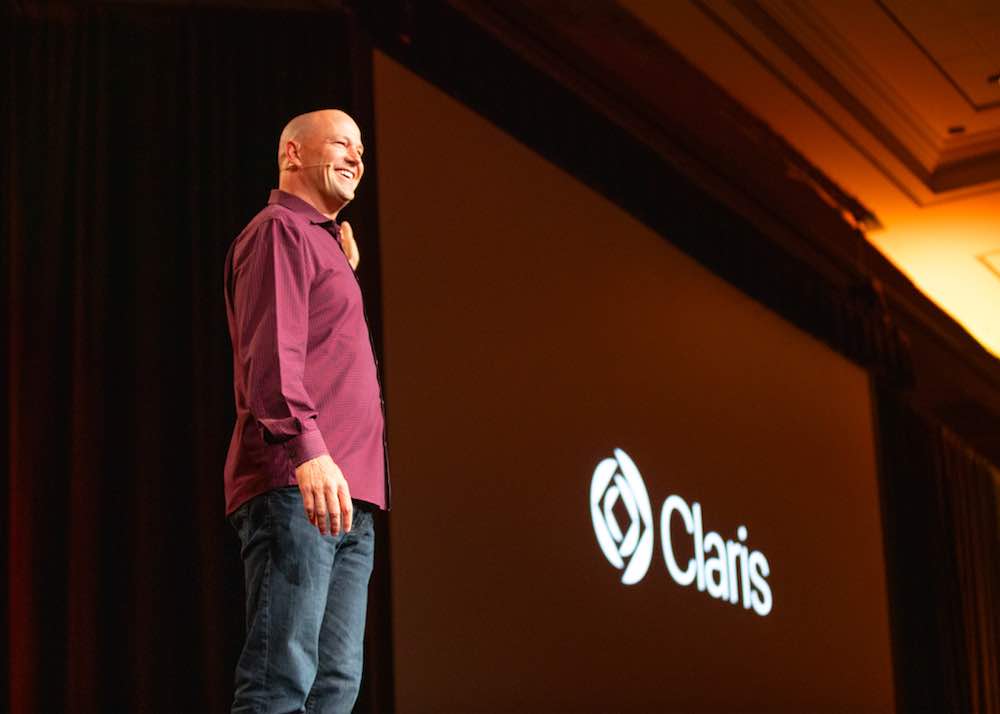 FileMaker today announced that in future the company will be called Claris – and signalled some big intentions in the developing space of automation and transformational technology.

The company also announced the acquisition of Stamplay, a service that helps businesses of all sizes integrate data from third-party cloud services such as Box, DocuSign, and others into their apps.

Claris is the name FileMaker began by in  1986, when it launched as an Apple subsidiary.Claris was created by Silicon Valley legend Bill Campbell.

The name remains legendary among Apple watchers. There’s even an amusing icon called Clarus the Dogcow, which many know (incorrectly) as Claris the dogcow. He’s meant to go “moof” when he barks. It’s possible this was funnier in the 80’s and 90’s…

What is the significance of Claris?

“Nothing better encapsulates the company’s mission: to empower the problem-solver with smart solutions that work for their business. By extending the reach of our platform as a modern, multi-faceted, and powerful merger of on-premises custom apps and third-party services, our customers can streamline their business processes across the cloud services that they use every day.”

How will Stamplay tech be used at FileMaker?

Stamplay allows people to easily connect their custom apps into 3rd party services, creating automated workflows integrated with the likes of Dropbox, Slack, Salesforce, Mail Chimp, Box and others. Claris has fully integrated Stamplay and is offering it as Claris Connect.

This will provide customers with an intuitive interface for automating workflows across cloud-based services, saving them from the task of building custom-built, backend integrations.

Claris Connect will be available by invitation this fall and available for wider distribution in 2020. To learn more about Claris, and its offerings, visit www.claris.com.

How does this signal the future for FileMaker/Claris?

The new Claris wants to triple its customer base and expand its platform’s reach into new sectors. It hopes to do this by combining custom apps with third-party cloud services, so customers can create powerful enterprise-class solutions. I can’t help but see this (in part) as Shortcuts for enterprise tech.

Why is Claris doing this?

It’s all about digital transformation.

The company believes successful business must enhance their use of digital techy to reinvent themselves.

This reinvention extends from changing in workflow to internal management to business processes and beyond, and automation will be part of this (hence Claris Connect).

By seeking opportunities in RPA (robotic process automation), Claris hopes to surf the digital wave and build on its extensive experience in databasing and enterprise tech.

“There are dozens if not hundreds of processes in every business – from enterprise to SMBs – that could be automated and fully orchestrated,” the company said.

This is the beginning of much bigger efforts in the enterprise technology space.

“Going forward, Claris will invest in integrating emerging technologies (AI, AR/VR, and more) into its platform to create the next generation,” the company wrote in an email.

Transformation as a service

Thing is, there really aren’t enough developers to build all these digital transformation projects, meaning small and mid-sized businesses are in many cases are being left behind. They can’t afford to find, hire or retain the staff to compete with bigger enterprises in this.

Many need a platform that allows the people within their organizations to be ‘problem solvers” – and these need to be the people closest to the problems, needs, data, and workflows, to create viable solutions.

That’s what Claris hopes to deliver.

FileMaker created a category called the “Workplace Innovation Platform” – a suite of services that empower everyday problem solvers (even with minimal technical knowledge) to create custom apps, integrate those apps with existing programs and automate workflows.

The idea is that anyone with a little technology skill can accomplish robust digital transformation projects for their company’s.

FileMaker was created to let anyone create custom apps without bringing in a custom development partner, which is a massive benefit to SMB’s.

That being said there are massive companies building apps with FileMaker, including Gap, Clorox, American Express, Morgan Stanley, Southwest Airlines, and 95% of Fortune Global 500 companies.

What you didn’t know about FileMaker

In the years before Apple’s big turnaround, it was FileMaker that kept the business afloat.

FileMaker has been profitable for 80+ consecutive quarters with a customer base of 50,000, over 1 million end-users, and more than 4 million iOS downloads.

Apple’s long-profitable and wholly-owned FileMaker/Claris subsidiary has felt increasingly anachronistic in the market in recent years.

However, its deep engagement across global enterprises and its Apple-driven insight into how enterprises actively use Apple products in digital transformation projects means the company may yet have a part to play in the evolution of enterprise technology.

After all, most every innovation in the sector is based to a large extent on data, the use of data and intelligent analysis of data.

At the same time, most enterprise leaders now recognise that the opportunity of digital transformation to invest in new management, workspace and agile business development practises is huge – but the need to develop these solutions has created a sticking point.

Digital transformation for the rest of us

I think Claris/FileMaker’s vision here comes down to “digital transformation for the rest of us”, as these developments should enable even smaller SME’s to exploit these opportunities, even to the point of identifying and accessing new business through new approaches and working practises.