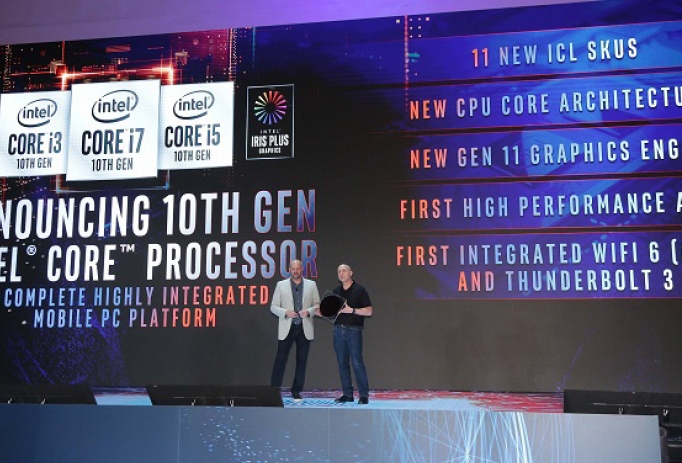 File it under unconfirmed speculation but it looks possible Apple intends packing Intel’s new tenth-generation Ice Lake processor inside its laptops, and these could appear soon – though the evidence is a little shaky.

What’s the evidence for this?

Benchmark tests for what appear to be Ice Lake-powered Apple notebooks have appeared online.

The leak comes from 3DMark Time Spy benchmark results, which were shared by @_rogame on Twitter.

According to these leaks, the MacBook Pro 2020 13-inch will come with an Intel Core i7-1068NG7 processor with four cores and eight threads, with a 2.3GHz base clock and a 4.1GHz boost.

Ice Lake promises better battery performance, graphics and processor power, and integrates support for Wi-Fi 6 and Thunderbolt 3. It is manufactured using 10-nanometer process technology and should lead to thinner devices.

What Intel tells us about Ice Lake

“These 10th Gen Intel Core processors shift the paradigm for what it means to deliver leadership in mobile PC platforms,” said Chris Walker, Intel corporate vice president when the company announced the chips.

They also include on-chip machine intelligence in the form of Deep Learning Boost, which Intel describes as a new, “dedicated instruction set that accelerates neural networks on the CPU for maximum responsiveness in scenarios such as automatic image enhancements, photo indexing and photorealistic effects.”

“With broad-scale AI for the first time on PCs, an all-new graphics architecture, best-in-class Wi-Fi 6 (Gig+) and Thunderbolt 3 – all integrated onto the SoC, thanks to Intel’s 10nm process technology and architecture design – we’re opening the door to an entirely new range of experiences and innovations for the laptop.”

Catalyst has some way to go

The news comes as Apple is expected to introduce a new 13-inch MacBook Pro, hopefully equipped with the new scissor-switch keyboard as you now see in the 16-inch machine. This may well appear next month (March).

If the Mac does feature the Ice Lake chip then it will be the first one to do so. And, of course, also suggests that if Apple does ever intend installing its own A-series processors in Macs, it won’t be this year.

To be honest, this makes sense given the company still needs to do more work making sure its Catalyst iPad OS to macOS solution is feature complete before universal apps become truly universal.

We’ll see if this happens, but it doesn’t feel terribly unlikely – though it will be interesting to see how soon the 16-inch MacBook Pro is upgraded similarly.