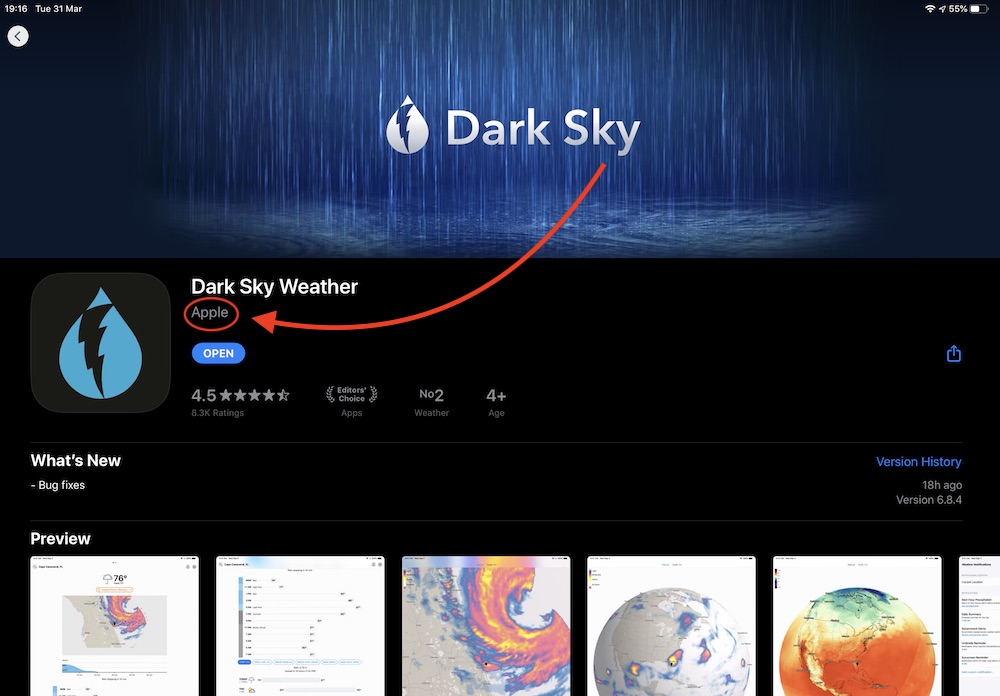 Apple has purchased the world’s best weather app, Dark Sky, and while this means the app won’t be available on other platforms, it also means we can look forward to a better Weather app in future.

I must confess that Dark Sky is the app I turn to when I want accurate weather predictions. In my experience other apps don’t quite cut it, which is a shame given the firms behind those apps.

It’s the best weather app I use.

Bad news for some

“Today we have some important and exciting news to share: Dark Sky has joined Apple.

“Our goal has always been to provide the world with the best weather information possible, to help as many people as we can stay dry and safe, and to do so in a way that respects your privacy.

“There is no better place to accomplish these goals than at Apple. We’re thrilled to have the opportunity to reach far more people, with far more impact, than we ever could alone.”

The bad news is for Android users.

The company warns the Android and Wear OS Apps will no longer be available and service to existing users and subscribers will continue until July 1, 2020, at which point the app will be shut down.

(You’ll get refunds if you paid for the service — though given the acquisition, it doesn’t look like enough Android users did pay.)

What about the developer API?

The company is also withdrawing its API (used by other weather apps, including Carrot), but not until the end of June 2021.

We don’t know if Apple will make that API available to iOS developers by then — given WWDC will likely take place at the beginning of June that year in some form.

I don’t think it unreasonable to imagine Apple will make an API available, given the importance of accurate weather data across data analytics implementations for a huge range of multiple industries. It just doesn’t feel smart for an API not to emerge.

But what’s also interesting is how Apple plans to deploy this really outstanding weather app tech across its platforms. Hopefully this will take place faster than the deployment of Beddit….