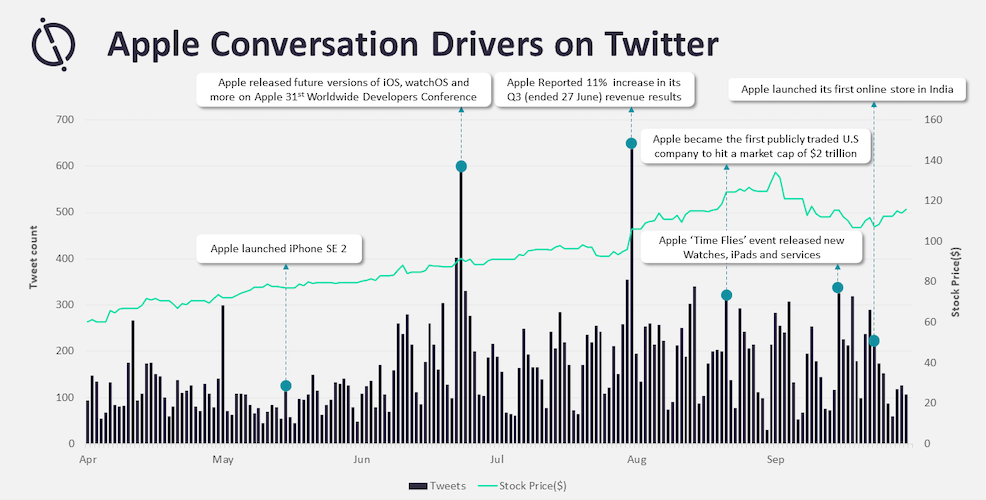 COVID-19 continues to be a global cataclysm, despite which there have been some more positive spots, one of which being Apple’s success in pivoting from in-person into remote working and remote events.

Now the latest data shows its events have kickstarted the conversations on social media, giving it even more attention than before.

“Apple has set a new standard with virtual events, which led to a 100% rise in Apple related influencer conversations on Twitter during April-September 2020 compared to the previous six months.”

“Nearly all businesses suffered during the COVID-19 pandemic. Apple also temporarily shut down its factories in China for the safety of its employees and closed several retail stores across the globe. However, the company has managed to shine during this gloom, becoming the first US company to reach US$2 trillion in market value.”

What conversations led this year?

Oddly enough, it’s money and opportunity which drove the conversations, GlobalData claims? The company’s Apple Influencer Platform reveals that in August the online conversations were led by:

Now, I’m not sure to what extent I buy into GlobalData’s claims, but I can anecdotally confirm that interest in Apple and its doings seems to have reignited in contrast with last year.