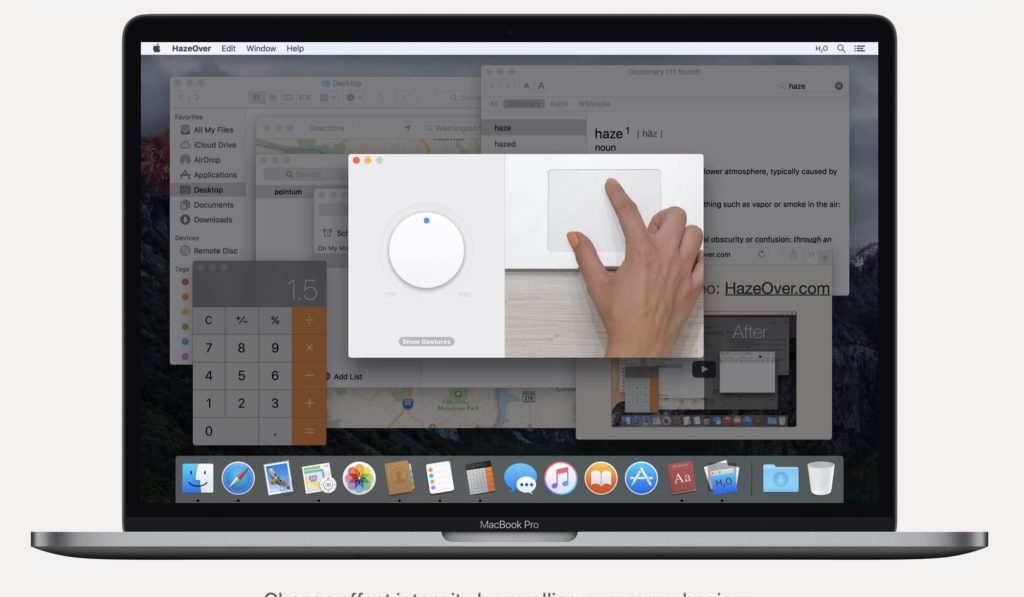 Apple’s soon-to-ship macOS 10.14 ‘Mojave’ OS has a new Dark Mode feature everyone seems to love and can’t stop talking about – but there’s a small snag that’s easy to fix, thanks to Maxim Ananov’s HazeOversolution.

Dark Mode is a really nice space to work in, but it has one slight problem. You see, most of us like to use the mode at night, or when trying to prevent ourselves being distracted by background apps. The thing is, when working in the mode the white areas in those background apps themselves become visual distractions.

HazeOver fixes this by applying a dark film across all the background elements on-screen, effectively putting a mute button on background mode distraction.

What does any of that mean?

The easiest way to describe what that means is to share this video:

It shows you how it mutes the background, and gives you a sense of the apps snazzy, wheel-controlled interface. Dig a little deeper and you’ll find that HazeOver is also compatible with day mode (?) Mojave, and will once again put a haze over background items so you can focus more.

What the developer says

“The drawback of the Dark Mode is that the overall contrast and any bright elements become critical. Any single bright spot on the screen will glare at you from the background, breaking the whole experience.

“Many apps are not going to support the Dark Mode right away. It’s an opt-in feature that needs a Mojave-specific update. Developers need to put considerable work to thoughtfully implement the dark appearance. Text documents or other content intended for print have to stay bright at all times. Developers can also choose to opt-out of the Dark Mode altogether. (In which case) the app will appear as a regular “Light Aqua” app, regardless of user’s preference.

“Another major source of visual inconsistency is web content. There’s no official API that would let a website adapt to the dark appearance. Apple has private CSS media query to restyle web-based documentation in Xcode as light-on-dark. They also push it as a web standard so that websites would know if a visitor uses dark interface. Unfortunately, even then most sites would not bother to adjust accordingly.”

Here’s another video that shows how the app works on High Sierra.

OK, so when can I get the app?

You can already get hold of HazeOver for High Sierra Macs. It costs $4.99. An update to support Mojave will be published when the new Apple macOS ships. People seem to like the existing app – it has achieved a healthy 4.9 out of 5 in App Store user ratings on the basis of 161 ratings. I think it seems promising, I really like the interface, and so this is my (irregularly published) ‘App of the Day’. I hope you like it too. Get it on theApp Store.