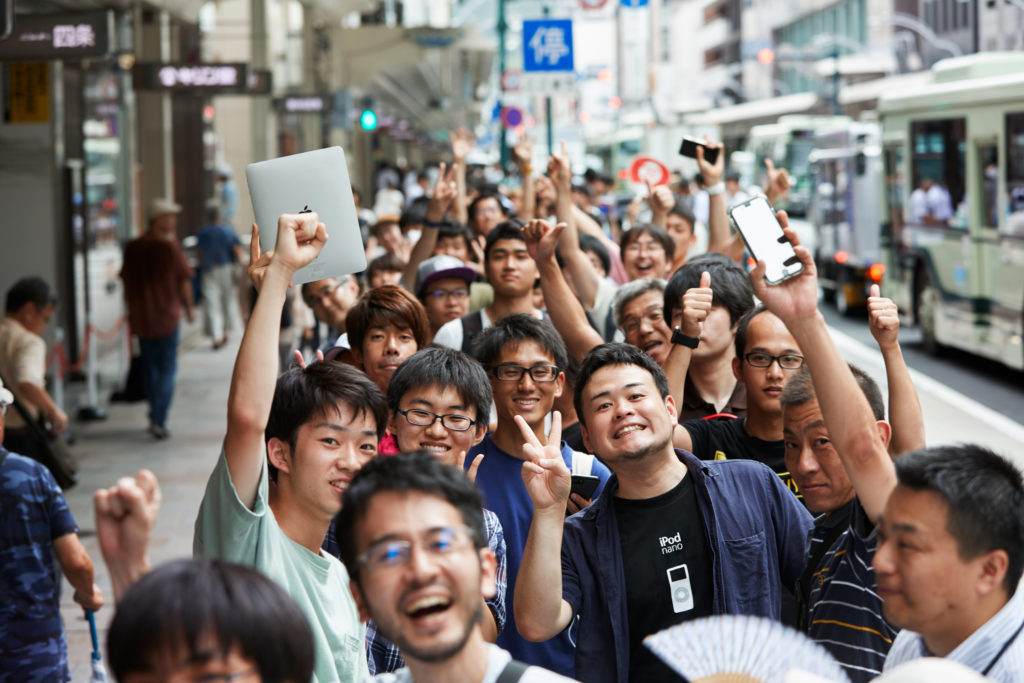 Apple’s new Kyoto store: Customers queue down Shijō Dori, the street that has served as the city’s main shopping corridor since the 1600s.

We’ve had quite a time of it since Apple snuck news of the limited iPhone 8 repair program through late Friday afternoon before the weekend began.

Highlights: Always on Apple Watch, new iPad mock-ups, an iPhone XS concept video, AR Maps, the end of mobile security and more. Here’s all the claims in one place for quick and easy reading:

That thing where you need to raise your watch to your face to check the time (or slowly twist the Digital Crown button)? It’s so over, if a leaked patent for an always-on watch face holds any truth at all.

The patent basically suggests using clever brightness enhancement tricks and only using part of the screen to show the time to save battery life. I say this sounds like a 70’s Casio, which didn’t use too much power…

Additional Apple Watch rumors across the last few days included: Further speculation around a round Apple Watch model and a 9-5 scoop “discovered” (which must be the new euphemism for “leaked” and no, I don’t believe it was leaked by Apple PR) that showed a really attractive new watchface. Here’s a video of that round watch concept.

Everyone expects the new iPad Pro range to have thin bezels, no Home button, Face ID and significantly faster processors delivering even better battery life. You’ll use an iPhone X-style UI and get access to all those tasty productivity enhancements we’re looking forward to in iOS 12.

Here’s the concept renderings that are doing the rounds. c/o OnLeaks:

Bigger AND smaller, more expensive AND cheaper, an iPhone X and an iPhone 9 and all rolled into one. That’s part of what we expect from Apple’s faster, tougher and multi-colored iPhone 2018 range.

Last week’s leaked images have now been joined by a new concept video showing the purported 6.5-inch model in gold. Don’t take it too seriously, this isn’t an actual video of the actual iPhone, just a quick and easy concept to keep you talking. (It’s popular, too, and has been viewed 466,000+ times):

Apple has already pretty much told usto expect AR Maps at some point, but not too soon. As part of the project (which has obvious implications for Project Titan and its attempt to resolve the age-old problem that even if you are driving logically all those other souls on the roads probably don’t), Apple has been hiring people to help build AR and LiDAR mapping solutions, a Thinknum report said.

Several other snippets you may want to catch up with: International spy agencies are demanding we keep them in work by making the mobile world less secure with the addition of secret ‘back doors’ in mobile devices. They sure are onto a winner, because it’s only a matter of time until such back doors leak into the wider domain and then none of us will be safe. It really is job creation for spooks. I urge that wider counsel prevail but looking around the shameful shower that comprise current government establishment in most of the Five Eye countries I’m not especially optimistic.

The latest (twelth) beta of iOS 12 shipped Friday. This fixed some over-blown beta bug and this beta makes Siri Shortcuts a little more interesting (I thought), with some new and useful shortcut suggestions. Just in terms of performance iOS 12 is looking great….

On Apple Must, we published:

I will be interested to find out what the Stanford/Apple heart study project findings might be. The huge study is coming to an end soon– what fresh insights will it bring? I guess we’ll find out once the data is analysed.

And finally here’s what Apple CEO, Tim Cook, had to say for Labor Day:

As the proud son of a shipyard worker, I grew up appreciating the dignity of work. Celebrating Labor Day means celebrating the idea that when everybody gets a fair shot to prosper, our country is a better place for all. #LaborDay